Tom LeBeau and I have been hard at work creating the “Pauline” album.
We recently invited our friend Josh Allen to 5 Front Studios to track his cajon (a box-shaped percussion instrument that he built himself and proudly decorated with sweet Star Wars stickers).  Josh is the percussionist for the Franklin County Sweethearts, and occasionally Tom and I will borrow him for a set of our own, so we wanted to feature him on the record. Josh is also a photographer who is based in the Pioneer Valley.  He has worked with us and many other fabulous local artists since first moving here from Ohio!

While we make steady progress tracking for the album,  I’ve also been experimenting with album artwork ideas.  I used cutouts from my sketchbook and found pieces to create the first very basic prototype front and back cover design for the album.

These were taken on my phone at my kitchen table, just to get a feel for the basic layout: 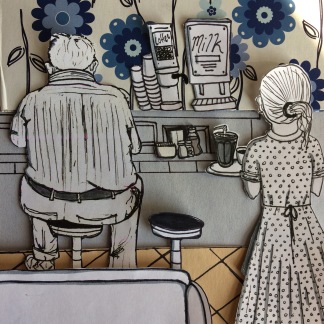 1st prototype of the front cover of the “Pauline” album. 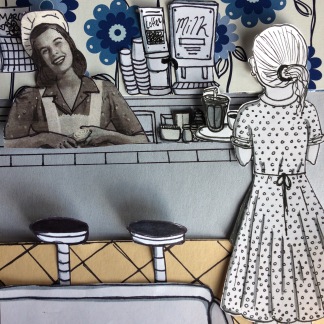 1st prototype of back cover

Pauline as a waitress “serving coffee in a restaurant”
~ Based on a sketch done one morning over breakfast
at Charlie’s Diner in Spencer, Massachusetts ~